I was at the rally and a participant. We were not there to start a riot. In fact, to avoid being victims of violence (We live near DC and know the character of the local government.), the crowd I was with left early.

The violence was unnecessary and could have been stopped. For all practical purposes, the local DC government allow it to happen. How do we know. This is hardly the first time this year this sort of thing has happened. 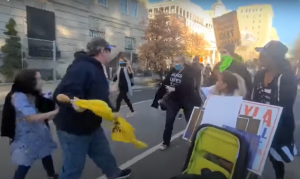 Why would make Antifa and BLM thugs believe that harassing and violently attacking innocent families with children, even elderly, shoving them to the ground (child on left in picture was crushed under protective man with flag when BLM woman charged him. Click on pic for video), or shooting fireworks into a crowd of people at a restaurant, a justifiable thing to do?

12 thoughts on “The trajectory of hate”