Think about the point Mel is making here. We can all be one in Christ Jesus. The key is that we obey His commands and love each other.

Will we all be the same? No, but the distinctions between us will no longer matter.

Our distinctions matter now because we put our self first. When we put God first, we realize that the distinctions we put between us are silly things. 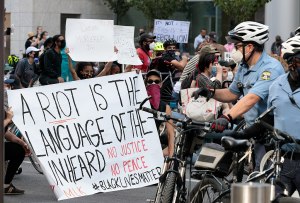 I can sympathize in many ways with all the social unrest going on today, and many things certainly do need to change in how we see and treat one another. That’s not my point here. As a follower of Jesus, I have to ask a bigger question with regard to the unique times we find ourselves living in: How would Jesus have us respond to our current cultural climate?

40 thoughts on “What the world needs now”