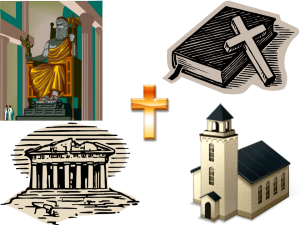 Instead of a Christian revival, our nation is experiencing a Pagan revival. That, essentially, is the thesis of this article in The Washington Times,  Losing our Religion: America becoming ‘pagan’ as Christianity cedes to culture (washingtontimes.com).

Here is how that article starts.

The Rev. Stephen M. Koeth, a Catholic priest and Ph.D. history candidate at Columbia University, was teaching a class one of Martin Luther King Jr.’s sermons that mentioned the road to Jericho. He found it striking that none of the students got the reference to the road, which is where the parable of the Good Samaritan takes place.

But then the Rev. Koeth realized it wasn’t just the road — the students weren’t familiar with the Good Samaritan.

That makes them pagans, in the very real sense of the word, he said.

“They have no knowledge, no practice, no anything,” he said. “It’s not that they’re antagonistic…

5 thoughts on “TO BE PAGAN IS TO BE ISOLATED”