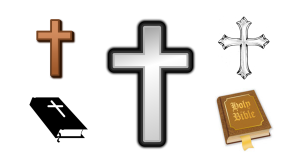 Think about that cross and that book. A couple of thousand years the Bible says God took the form of a man and sacrificed Himself to redeem us from the worst form of slavery, enslavement to sin. Belief in Jesus frees us from enslavement to sin. Those who believe in Jesus most certainly behave better than they might otherwise behave.

Because of Christianity, over two hundred years ago Americans managed to form a new form of government, a constitutional republic. In all previous civilizations most people were to some degree enslaved by other people. In America most people were free, and this sort of government worked because most people could be trusted to behave themselves without the threat of violence. The Christian beliefs of Americans gave them the backbone to resist sin, to fight the desire to abuse and oppress each other (see James 4:1-10).

In a speech (see ATTORNEY GENERAL WILLIAM BARR’S CONTROVERSIAL SPEECH?), Attorney General William Barr explains in more detail the importance of religion in America’s formation an ongoing success. If you believe America was never a Christian nation, that is understandable, perhaps. However, if after listening to Barr, you still believe Christianity was unimportant in America’s founding, then you have some serious explaining to do.

Transgenderism is a dialectical ploy of the Left being used to create compromise in our schools that results in the moral breakdown of our society. According to progressives today, dialectical thinking is all about ‘change’, how we perceive it, and how we get rid of prejudices and rigid thoughts. The argument that kids who are transgender (TG) should be allowed to use the bathroom and showers of their ‘gender identity’ uses dialectical thinking to win their case.

Listen to their reasoning:

“Change is thought as a unity of the opposites… When a person opens up to the idea of change, he opens up to dialectical thoughts.” (https://psychologenie.com/dialectical-thinking)

According to the dialectical scheme, there is a thesis or statement of an idea; an antithesis or contradiction of the thesis, and then synthesis in which the thesis and antithesis are resolved through compromise. So, let’s break down this argument by example and see it at work:

Thesis: The gender of boys and girls is determined at birth, male and female, and natural modesty.

Antithesis: Some boys and girls believe they are the opposite gender but equipped with the wrong genitalia.

Synthesis: Because that is part of their reality and citizen right, transgender (TG) kids must be allowed to use the bathroom/shower room of the gender with which they identify.

…and with that compromise, morality, modesty and decency go down the drain for the majority of the school population…and the decay of our society decays, which is what the social engineers are after! (continued here)

Note that dialectical thinking is all about change in the form of compromise, not about what is true or false. If we don’t teach our children wisdom, how to discern the difference between right and wrong, evil people will constantly devote themselves to the creation of new and more extreme Antitheses and demand new compromises, that is, new Syntheses. And our children, not knowing any better, will try to seem reasonable and “with it” by giving in.

If You Don’t Stand for Something, You’ll Fall for Anything. (Anonymous, from here)

To save our children from sin, from falling for anything, we need to make certain they learn about Jesus.

12 thoughts on “HOW DOES ETHICS WITHOUT BACKBONE THREATEN OUR SALVATION?”