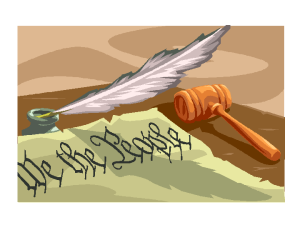 Thanks to the mass media and the insanity of an education system run by people none of us trust, politicians, too many people who should know better interpret the Constitution without much regard as to what it actually says.  Hence I have asked some of the commenters on this blog a question.

When does it become immoral to give the government more power? What is the moral principle you would apply?

Liberal Democrats (and their fellow travelers) have profound difficulty recognizing an appropriate limit to government power (see here and here). Why?

Why do people, people like us, misinterpret the Bible and even the laws we write? Often what we are trying to do is force the Bible and our laws conform to our own wishes when they do not. When we do not want to be held accountable to certain principles, we will find some way to justify ourselves.

To make all Laws which shall be necessary and proper for carrying into Execution the foregoing Powers, and all other Powers vested by this Constitution in the Government of the United States, or in any Department or Officer thereof.

James Madison wrote part of Federalist No. 44 to explain this clause and why the writers of the Constitution could not be more specific. Even though they did not much trust their judgement (otherwise, why write a Constitution), Madison and the fellows who wrote the Constitution had no choice except to leave some things to the good judgement of the people we elect. As Madison observed in Federalist No. 44, they had four alternatives, none of them especially good.

Without the SUBSTANCE of this power, the whole Constitution would be a dead letter. Those who object to the article, therefore, as a part of the Constitution, can only mean that the FORM of the provision is improper. But have they considered whether a better form could have been substituted? There are four other possible methods which the Constitution might have taken on this subject. They might have copied the second article of the existing Confederation, which would have prohibited the exercise of any power not EXPRESSLY delegated; they might have attempted a positive enumeration of the powers comprehended under the general terms “necessary and proper”; they might have attempted a negative enumeration of them, by specifying the powers excepted from the general definition; they might have been altogether silent on the subject, leaving these necessary and proper powers to construction and inference.

Because the Articles of Confederation had not given the central government enough authority, the first option would not work. Because literally enumerating every task the Congress has would take too much ink, the second option was impractical. Inevitably, the Framers would have forgotten or not have had to the time to include all that is needful. The third option was dangerous, “every defect in the enumeration would have been equivalent to a positive grant of authority.” Silence by implication obtained the same result as including the clause.

Had the Constitution been silent on this head, there can be no doubt that all the particular powers
requisite as means of executing the general powers would have resulted to the government, by unavoidable implication. No axiom is more clearly established in law, or in reason, than that
wherever the end is required, the means are authorized; wherever a general power to do a thing is given, every particular power necessary for doing it is included. (from Federalist No. 44)

So the Framers just included the clause.

Consider again how that last clause in Article 1, Section 8 begins. It refers to the execution of those forgoing powers in Article 1, Section 8. What do things like Social Security and Medicare have to do with the Constitution? Nothing, but we have let Congress get away with creating various welfare institutions, and the expense is wrecking the Federal Budget.

Consider also that a discussion Federalist No. 44 does not address my question. That document considers that division of powers between the States and the Federal Government, the problems of writing the Constitution so as to constrain the Federal Government without stripping it of the powers it must have, and the problems of holding Congress accountable to the Constitution. My questions, however, are not about the Constitution; they are about the morality of government, using government force to control the People.

Oddly, since he wrote quite a bit, tsalmon doesn’t actually answer my question. He says he will  look at my question later. Instead, he asks a question, and I have to answer his question first:

What are the moral limits of scientific enquiry and expansion? (from here)

I suppose tsalmon is trying to demonstrate that my question is impossible to answer by asking an analogous question.

Is tsalmon’s question difficult or even impossible to answer? Well, it is difficult. Consider that the Bible is a book of wisdom, and it is a long complex work. The Bible tells us how to glorify our Maker. What does the Bible suggest? Why do we engage in scientific enquiry and expansion? We do so to understand, enjoy, and be thankful for what our Lord has created, to give glory to our Maker. Therefore, we cannot righteously engage in forms of scientific enquiry and expansion that violate the commands of our Maker. To fully understand what our Maker wants from us, we need to read and study His Word.

Where is my question answered? It is specifically answered in the Declaration of Independence, Jefferson defines the purpose of government as the protection of our God-given rights. Consider an alteration.

We hold these truths to be self-evident, that God is the Maker of All Things and that He created Man to glorify Him, that all Men are endowed by their Creator with an insatiable curiosity to know the Things of God, that among the things of God are Time, Energy, Matter, and Life. –That to know the Things of God, Fellowships of Scientific Enquiry and Expansion are instituted among Men, deriving their potency from the Inquisitiveness of the Common Man, –That whenever any Form of Scientific Enquiry and Expansion becomes destructive of these ends, it is the Obligation of the People in part or in whole to alter or to abolish it, and to institute new Fellowships of Scientific Enquiry and Expansion, laying their foundation on such principles and organizing their powers in such form, as to them shall seem most likely to Glorify and Please our Creator.