It happened lifetimes ago now. Our nation suffered from a terrible division. Some people insisted upon having their own way, even to the point of forcing their fellow human beings into slavery. These people divided our nation. Only firm resolve, leaders with fortitude, and the grace of God kept our union together. Today we face similar issues. Will we exhibit the same resolve? Will we elect men and women with the fortitude to preserve both our Constitution and our unity? Will we repent of our pride and turn to God?

Here is the final post in this series about what motivates  Shak Hill‘s quest to become Virginia’s 10th Congressional District’s Member in the House of Representatives.

What were the topics of the previous two posts?

What is the topic here?

How Can Shak Hill Win?

Who wins an election depends upon two things.

We have already talked about the candidates. What about the nature of the voters in Virginia’s 10th Congressional District? How do they tend to vote? Consider the graphic below. 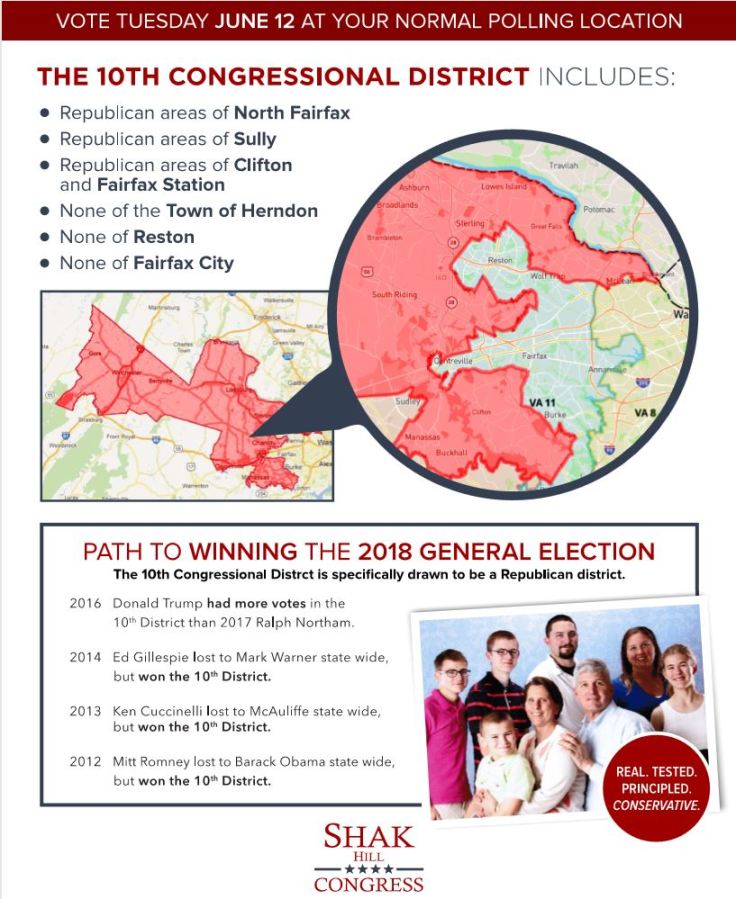 What does the graphic show? Even when the rest of the state votes for Democrats, the 10th Congressional District votes for Republicans. The 10th Congressional District is relatively conservative, more Conservative than Congresswoman Barbara Comstock. So Shak Hill‘s immediate problem is to win the nomination, and the odds for that are looking good.

What does Hill need at this point? He needs people who care enough to come out and support him.

Consider why the Civil War became necessary and unavoidable. Our nation too long ignored the problem of slavery. Not enough people became outraged against slavery until the slave masters gave them no other choice. When the slave masters insisted that everyone had to agree with them or else, the People finally realized they had to say “NO”. No compromise was possible.

History is repeating itself. However, instead of just one major issue, we now have a plethora of social issues dividing our nation. Yet it comes down to the same basic problem. Instead of protecting everyone’s God-given rights to Life, Liberty, and the Pursuit of Happiness, Democrats want to give some people more rights than other people. Instead of allowing individuals to make their own decisions about their own lives, Democrats want to make ALL our moral decisions for us. Using “tolerance” as their excuse, Democrats have become monstrously intolerant, almost unable to forbear with any disagreement. Hence they speak of transforming our society.

Are you outraged yet, or are you okay with being transformed by a Secular/Socialist Government? Do you fear for the rights of your family, friends, and neighbors? Does the absurd inability of the Federal Government to control its spending alarm you? Are you prepared to do what you must do to defend our constitutional republic, intelligently participate in the political process? Then take the time to meet Shak Hill. See if he is the kind of citizen you want to send to Washington D. C. to represent you.

You can meet Shak on March 16th. Check out the flyer below. 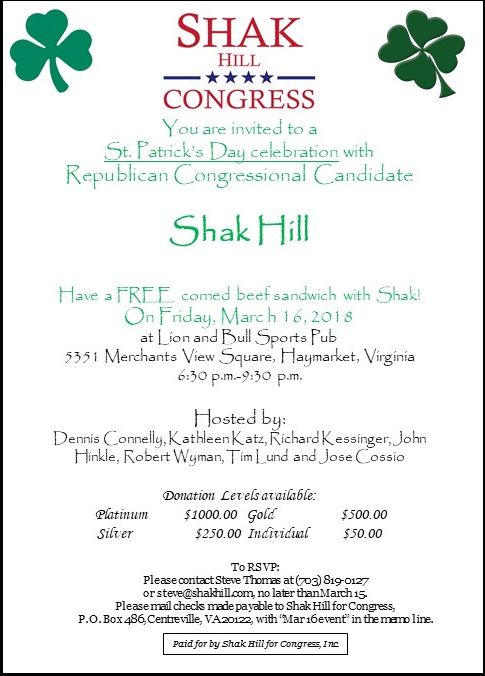 2 thoughts on “HOW A POLITICAL CAMPAIGN STARTS — PART 3”