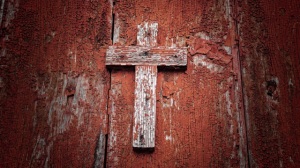 Look at the picture above. Does not look like much, but what does it symbolize? For moment contemplate the four Gospels. Imagine the terror the apostles felt when Jesus was seized, tried,  condemned, and crucified. Pontius Pilate sought His release, but the Jewish priesthood wanted Him dead. Therefore, Pilate ordered Him beaten and whipped; he allowed Him to be crowned with thorns and ridiculed. Finally, Pilate had Jesus crucified between two thieves.

Why had this happened to the Christ, the Savior? Even after being Jesus’ disciples for three years the apostles did not know. So after His death they hid, afraid.

What was Jesus doing? In Agree to Disagree?,

insanitybytes22 explains the difference between peacemaking and peacekeeping. Peacemaking is biblical, but what about peacekeeping?

It is not biblical. The bible says, “Blessed are the peaceMAKERS: for they shall be called the children of God.” Making the peace is a whole different thing. “Making” is an action word, “keeping” is more passive. Peacemakers must stand in the truth, there is often going to be confrontation, and you cannot simply agree to disagree because that is just like draping a paper towel over a big mess on the counter and pretending you’ve fixed it.

Just because peacekeeping isn’t biblical, doesn’t mean I’m saying it’s wrong or sinful or anything. It sometimes serves a vital purpose. Sometimes just biting your tongue and keeping the peace really is the right thing to do. (from here)

When He died upon the cross, Jesus was peacemaking. Jesus confronts us with the truth of our sins. Then He provides the means for our forgiveness and reconciliation with God. Because God regards sin as a serious matter, He expects us to stop sinning, to obey His commands, but some people don’t want to obey God. That creates divisions between peacemakers and peacekeepers.

Pastor Randy explains that he considering is parting from the United Methodist Church (UMC).

So, as I await the decision coming in February 2019 from the governing body of my Tribe, a Tribe of which I have been in my entire life, I have made my decision.  My decision is to become the person God intends for me to become and be faithful to His design.  After all, HE created me.  Furthermore, as one called out because of God’s grace, I will no longer be tied to a group that emphasizes feelings over truth.  I grieve deeply over this informed decision in my heart, but I will be faithful to this decision with deep humility.  Though I grew up in the United Methodist Church, and have served Jesus for over 43 years in this church, I probably will not finish my race in this life in this Tribe if the decision is “choose your own way”.  As Joshua challenged the Hebrews, his challenge is now before me from Joshua 24:15 (NIV)

But if serving the Lord seems undesirable to you, then choose for yourselves this day whom you will serve, whether the gods your ancestors served beyond the Euphrates, or the gods of the Amorites, in whose land you are living. But as for me and my household, we will serve the Lord.”

It is better to serve the Lord…and this is my choice, my only “option”… (from here)

What is the decision

is waiting for? Whether the UMC will accept the practice of homosexuality for the sake of peacekeeping.

29 This is all that I have learned: God made us plain and simple, but we have made ourselves very complicated.

There are also many straightforward explanations of what the Bible has to say about homosexuality.

Unfortunately, some people want rationalizations for their behavior, not the simple truth.

The rationalizations sound logical, if absurdly complicated, but rationalizations do tend to do that. My favorite is the observation that the word “homosexual” was not invented until the 19th century, as if homosexuality as practiced today is something brand new. Does anyone really believe that, or have some people just managed to convince themselves of something they want to believe true?

Whatever our choice of sins might be, we do love our sins. Consider what

This is the judgment, that the Light has come into the world, and men loved the darkness rather than the Light, for their deeds were evil. – John 3:19

Did you think lovers of evil disappeared during the Enlightenment?

The villains are still around. (from here)

So why would anyone decide to leave a church that he had been closely associated with for a long time? What do we go to church for? The answer is FELLOWSHIP.

atimetoshare.me puts it this way.

A family of fellow Christians can be a wonderful source of strength and encouragement for us. Many times though, we aren’t even aware of the pain and suffering they’re going through. We’ve all gotten wrapped up in our own lives and often forget that others need to be lifted up in prayer too.

That’s why being a part of a church family is so important to me. Even though there may be things that I might feel embarrassed to share with someone or too proud to let others know about, I realize that I have a family of friends who will pray for my needs along with theirs.(continued here)

Each of us has an obligation to carry out the Great Commission, but none of us has the strength or the gifts required to carry out that task alone. We need to work together and encourage each other. When the church we attend ceases to focus on Jesus — when it becomes a hindrance to focusing on Jesus — we must consider separating ourselves from it.

Is your church one of the Things That Keep Us From Following Jesus? Strictly speaking,

Wally Fry doesn’t talk about church membership in his post, but he does talk about discipleship. As members of the church we attend, we should be learning from each other how to be disciples of Jesus Christ.

There is a song with the following refrain: “Everybody wants to go to Heaven, but nobody wants to die.” We all want to attain heaven; we also like our lives here on Earth. Strictly speaking, that is not necessarily a problem; God blesses us and desires joy for us while we live here. He also has a mission for each of us while here. The problem arises when we think joy means getting what we want rather than God’s mission. Sadly, many want their ticket to heaven punched, but never want to actually leave the station and take the trip. (from here)

When the church we attend is led by people determined to ignore the clear meaning of scripture, what is the chance that church is helping its members learn to be disciples of Christ? If a church is not teaching its members to be disciples of Christ, then we cannot contribute to it or support it. We must support a church that strives to function according to the Bible as Jesus intended.

What does such a church do? It teaches the Gospel of Jesus Christ. It is about Overcoming Evil with Love (posted by Sherry).

First, we overcome evil by patience, which “beareth all things.” Let the injury be inflicted, we will forgive it, and not be provoked: even seventy times seven will we bear in silence. (continued here)

11 thoughts on “PEACEMAKER OR PEACEKEEPER?”