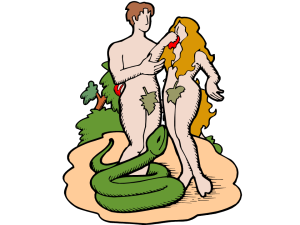 We like to blame the snake. Didn’t the snake trick Eve into biting into the forbidden fruit? But Eve knew better, and Adam most certainly knew what God had said.

15 Then the Lord God took the man and put him in the garden of Eden to tend and keep it. 16 And the Lord God commanded the man, saying, “Of every tree of the garden you may freely eat; 17 but of the tree of the knowledge of good and evil you shall not eat, for in the day that you eat of it you shall surely die.”

So what happened? Instead of humbling themselves before God, Adam and Eve decided to be gods. Read at Genesis 3. Chuckle at a familiar story. We have seen people behave like this before. When God showed Himself — when Daddy showed up — Adam and Eve ran for cover. When God tracked them down, Adam and Eve started making excuses and finger-pointing. Eventually, God lost patience and punished them. Because Adam and Eve would not trust and obey God, God would not trust them to care for His garden. Adam and Eve had fatally failed an important moral test.

Have things changed? Have the children of Adam and Eve learned how to behave? Well, this generation is certainly misbehaving.

Consider a typical discussion between a Conservative and a Liberal Democrat. What does the Liberal Democrat want to talk about? Look at the comments that follow ARE YOU PRO-ABORTION? — PART 3. Here is a sample.

So let’s borrow 15 or 20 more million dollars from our grandkids and have a parade for Donald Trump to celebrate, exactly what?

wants to talk about what is wrong with President Donald Trump. From there the discussion with

Are Conservatives somehow morally superior? No. Conservatives are not any better than Liberal Democrats. Sometimes our intentions may even be as selfish and vile as they say. The difference is that Conservatives don’t believe morality comes from government. Instead, Conservatives think when we refuse to exercise SELF restraint we get the government we deserve.

If we use the power of government to force our beliefs upon each other, a clear abuse of power, the worst among us will inevitably use that power to force their personal vision of Utopia upon the rest of us. What does that mean in practice? When we give our leaders more power than necessary, the powerful will use that power to enslave some people.

Consider the Gun Control debate.  In Now What?,

Tricia does a great job of laying out the issues. Her complaint is that we are not having a rational debate. Consider how her post ends.

And for God’s sake stop demonizing those who are skeptical about its effectiveness as “not caring about dead children.” That’s so needlessly divisive and just makes moving towards a successful solution less likely.

The problem of mass shootings is complex and requires more than just looking at gun control.  Mental health issues, effective red flag response methods, enforcing existing gun laws already on the books,  new ideas on school security and having better channels of support for parents dealing with extremely problematic kids all need to be a part of the discussion. (from here)

What is happening instead of a rational debate? Instead of letting people cool off and consider the problem rationally, we are taking our cues from “student survivors”. Here is an example: Florida school shooting survivors demand tougher gun laws (cnn.com) This news article features an emotional speech by a student survivor. Here is a sample.

Isn’t great to have public school teachers who are so willing to provide political indoctrination? Don’t you remember being that age? Problems were simple then. Make a rule against the problem, and the problem goes away. Wasn’t the world so much simpler when everything is black and white? Someone doesn’t agree with your perfect solution? That someone must be evil. If “I” don’t want a gun – if “I” think guns are bad and dangerous — what right does anyone else have to own such a thing and make “me” feel unsafe? Yep! When we are young, the world is so much easier. Daddy government will make everything good. The government just has to deprive some people of their rights.

As we grow older, we are supposed to become wiser. What does wisdom mean in practice? Wisdom usually comes with the realization that things are not as simple as we thought, that what other people think does have some relevance.

Consider something seemingly as simple as begging: Panhandling: A Fat Beggar’s Perspective (H/T to Hard Times Ministries). As he comes to the end his post,

Agent X eventually deals with this question: is it wrong to give alms to a panhandler? Does that question have a simple answer? No, but some think otherwise.

I ask Lubbock Christians to instead search your souls and humble yourselves before the Lord. There is nothing wrong with almsgiving. In fact, it is a directive straight from Jesus. There is NOTHING wrong with presenting a humble image, not even as a town. If our town is “Christian”, humility is our image, and we need not chafe at the sight of it on our street corners. And if this is a “Christian” town, then actually the cops are presuming too much authority when discouraging almsgiving to panhandlers since Jesus, our LORD, authorizes it. (from here)

Are we going throw people in jail for begging? Are we going to punish people for giving money to panhandlers? Then how do we stop panhandling? Isn’t panhandling dangerous, unnecessary and therefore evil? Who do we demonize and punish? The NRA? Republicans? Democrats? The ACLU? There has to be somebody. Is it all President Trump’s fault?

In spite of all the trillions we spend on health, education, and welfare programs, we still have people who would rather stand on street corners at stop lights and beg from waiting motorists. Why? Don’t exactly know. I just know some problems are not easily solved, but it is always easy to find someone to blame and demonize.

So what is the answer? That is really not the point of this blog. I only have a suggestion. When God kicked Adam and Eve out of the Garden of Eden, He promised a Savior. That savior has come. His name is Jesus. When our heart aches, mostly from problems of our own creation, perhaps that’s a sign we need to turn to Him for answers.

This article is disgustingly biased: These Florida lawmakers accepted money from the National Rifle Association (cnn.com). Note the video and the way CNN uses children to promote their own agenda.

Wyldkat mentioned this post in her comment (below): Questionable Roots in the Grass: Parkland Students Anti-Gun Protests [VIDEO] (victorygirlsblog.com) by Beege Welborn. Welborn‘s post contains a good summary of how the Liberal Democrat news media is using Parkland students to stage anti-gun protests.

13 thoughts on “THE CONSEQUENCES OF MORAL DEGENERACY: WITH A LITTLE UPDATE NUMBER 2”