The special election (See www.pwcvotes.com.) for Prince William County’s Clerk of the Court, scheduled for April 18,2017, has been a relatively quiet affair, but we do have some funny fireworks.  So here is a reminder to vote and a few details about what I hope was just a snafu.

Who is running for the job?

Smith apparently is either an inexperienced candidate, or she is devious. The Republican Party of Virginia seems to think her devious, but I will give her the benefit of the doubt. 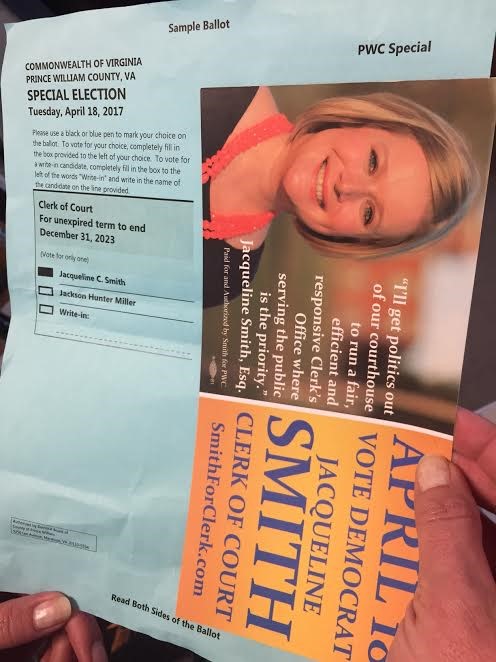 In a special election in Prince William County, Manassas City, and Manassas Park City local Democrat Party activists are handing out illegal ballots with intent to fool voters! The “sample” ballots have an official seal on them with a disclaimer from the local electoral board and a marking for the Democrat candidate. The problem is all three of these issues run directly counter to our state’s election law!

Even more ironic, the special election is for the Clerk of Court position which oversees the areas courts. Local Democrat Party activists are breaking election laws in an attempt to insert someone to oversee the court system!

We will not let the Democrats get away with this travesty! RPV has notified the authorities and is fully prepared to take legal action to ensure this election is not rigged against our candidate.

Make sure to let the local Dem candidate know that we are on to her supporters illegal dirty tricks. Call her campaign at 571-529-9379! (from here)

What the picture shows is a flyer held over a sample ballot. Since it lacks detail, I am guessing the picture is just a picture someone took with a cellphone.  The sample ballot is marked for Jacqueline Smith. Apparently, Smith’s campaign just took the official sample ballot off ww.pwcvotes.com (see that ballot here) and edited it. That’s a no-no, and a lawyer ought to know that.

Here is the official guidance from Virginia Department of Elections. Note that the “§” references are to sections in the legal Code of Virginia.

b. For federal offices, the disclaimer required by federal law must be used. For all other offices, the required identification on campaign material is specified in the Code of Virginia. For details, see the State Board of Elections website or call Department of Elections.

c. Samples of any ballot (or part of a ballot) cannot be printed on any shade of white or yellow paper and must contain the words “ SAMPLE BALLOT ” in type no smaller than twenty -four point. § 24.2-622.

Because they copied an official sample ballot and printed it on blue paper (They know they are Democrats.), they got some of it right, but anything else they could have gotten wrong, they got wrong.

If Jacqueline Smith cannot prepare a sample ballot right, we probably should not trust her with the county’s official records. Please vote for Jackson Miller (R).

8 thoughts on “SHE CAN’T GET THIS RIGHT?”