Because it is so powerful, shame is a dangerous tool. Imagine living in ancient Sparta and hearing a story about a boy stealing a fox from your teacher.

The Spartan boy, learned only the basics, according to Plutarch, such as music and mathematics. Their principal training is a military one, often even crossing moral boundaries, such as learning how to steal without getting caught. The philosophy was that, in case of a war, a soldier might have to steal food in order to survive. The main key point here is that, when a boy was caught, he was not punished for his act of stealing, but for being caught!  The Spartan youth had their favorite “game” of stealing food or other possessions from servants (Greek: είλωτες, helotes).

A well-known story that proves the Spartan training and loyalty is this: Once, a 13 year old Spartan boy stole a fox from a village near his camp. Alas, a trainer found him and asked him what he was doing off campus. The boy had seen the trainer and had hidden the fox beneath his cloth. As the boy said nothing, the trainer insisted. The fox, still alive, beneath the boy’s cloth, started scratching him, in order to escape. While doing that, the boy continued to deny the stealing until the wounds suffered by the fox killed him. (from here)

Because the boy would have been shamed if he had been caught, he endured the pain of the scratching fox. He also chose to die rather than expose the fox and admit he could not endure the pain. Therefore, the Spartans admired his bravery and toughness, and his story became part of their legend. Thus, the Spartans used shame to to steel the discipline and courage of their warriors.

We also shame adults when they ignore their consciences and misbehave. In The Power of Shame, Doug Bandow explains how a community punished a man who stood by and did nothing when his friend assaulted a girl. He describes how a community withdrew its fellowship from someone the law could not punish.

Some will ask, of course, whether or not it is right to withdraw our fellowship or ostracize another human being. There is a verse in the Bible that plainly commands us to do so.

6 “Do not give what is holy to the dogs; nor cast your pearls before swine, lest they trample them under their feet, and turn and tear you in pieces.

However, we should bear in mind the lesson of Matthew 7:1-5. Because God will judge us using the same measure we use to judge others, we should only treat those who leave us no other choice as dogs or swine. We must not forget that shame is a weapon, one we can use both to mask and expose vile sins. That is especially true when it comes to politics.

Consider this observation about narcissism.

It has been suggested that narcissism in adults is related to defenses against shame and that narcissistic personality disorder is connected to shame as well. Psychiatrist Glen Gabbard suggested that NPD could be broken down into two subtypes, a grandiose, arrogant, thick-skinned “oblivious” subtype and an easily hurt, oversensitive, ashamed “hypervigilant” subtype. The oblivious subtype presents for admiration, envy, and appreciation a grandiose self that is the antithesis of a weak internalized self which hides in shame, while the hypervigilant subtype neutralizes devaluation by seeing others as unjust abusers. (from here)

How does such narcissism play out in politics? Consider what happens we sin. 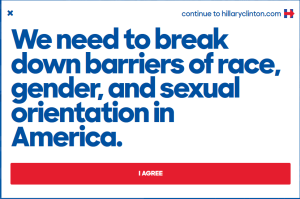 Here is the first thing we see on Hillary Clinton’s website.

Ted Cruz, on the other hand, offers this message.

Cruz is selling his record.

Cruz wants what he calls “courageous Conservatives” to join his team. Instead of fighting to be a powerful chief executive, Cruz is fighting to restore traditional values.

Who does Cruz try to shame? Corrupt politicians who spend our money like there is no end to it. What does he suggest for the rest of us? He urges us to see there is still hope if we are willing fight for our country. Cruz never comes out and says it, but there is no mystery here. Because we are letting our leaders get away with raiding the public treasury, he is saying we should all be ashamed.

At his website Sanders greets us with the Socialist’s traditional appeal for class warfare.

Sanders shames — demonizes — the successful. We all exist to pay taxes (How Bernie pays for his proposals) and give up our rights so various victim groups (Issues page) can get their “rights.” Don’t the “rich” have endless piles of money?

Trump leads with this slogan. Trump’s message is that he is the indispensable winner.

Here is the kind of headline Trump boasts about.

Winning is the focus of Trump’s campaign, beating The Establishment. Look at his Issue page.

I want to win for the people of this great country. The only people I will owe are the voters. The media, special interests, and lobbyists are all trying to stop me. We won’t let that happen!

Ironically, Trump has used that fortune of his to contribute millions to Establishment politicians. But Trump is supposedly a winner. Supposedly, only a loser would oppose him.

Why is Trump running?  Check out Trump. Nobody can read minds, but that article is as good a guess as any.

When our leaders seek to sway us, one of their tools is shame, and some of them can be shameless. Even if they have a record that should shame them, they will proudly stand forth as accomplished leaders. Even when the schemes they propose have been tried repeatedly and failed every time, they will still bold proclaim that only they have a plan to save our nation. Even when there is no good reason to trust them, they will still demand we give them everything and trust them.

At the same time they will shame all who oppose them. Their list of epithets is endless: selfish, racist, thief, liar, homophobe, sexist, pussy, pathological, fat cat….., even Establishment.

6 thoughts on “WHEN SHAME BECOMES A WEAPON”