To give you an idea how partisan the news media can be, consider John Whitbeck wins Republican nomination for Herring’s senate seat. What’s the story about? Half of it is about a supposedly anti-Semitic joke. Of course, The Washington Post has the video. They made use of this “anti-Semitic joke” to attack Ken Cuccinelli during his gubernatorial campaign.

Is the joke anti-Semitic? No, at worst it was just stupid, but by focusing on such nonsense the corporate news media seeks to distract us from far more substantive issues. So let’s focus on something more meaningful. Let’s take the time to check out John Whitbeck‘s Issues Page and his Education Plan.

Whose Candidate is John Whitbeck?

When we elect someone to public office, don’t we want him or her to represent us? What is a good indication of who the candidate will represent? As it happens vpap.org gives us a clue. Check out who is backing John Whitbeck and his two opponents.

What Are Others Saying About John Whitbeck?

What are others saying about John Whitbeck? Most people are so disgusted with his opponents they are saying relative little about him. Instead, they are complaining about his oponents. I suppose that’s a good thing for Whitbeck’s candidacy. I also suppose that is why Virginia Virtucon (here), BearingDrift (here), and The Bull Elephant (here) like Whitbeck’s TV ad.

SteveRossie at The Family Foundation‘s blog provides an analysis of Jennifer Wexton’s strange ad in With Control Of The Senate At Stake, Over The Top Wexton Ad May Cause Blowback For Dems. Similarly, in Wexton Compares “Tea Party Republicans” to Rapists, Thor’s Hammer did the same at Virginia Virtucon.

In Joe May Supports More Development and More Traffic in Loudoun and Fairfax, Jeanine Martin at The Bull Elephant focuses on Joe May.

You think the Loudoun County Chamber of Commerce is pro business? Think again. Consider their BizVotes Questionnaire Results- 33rd Senate District Jennifer Wexton (D) / John Whitbeck (R) / Joe May (I). Believe it or not, the Loudoun County Chamber of Commerce has supported higher taxes, including special taxes on Northern Virginia (that is, H.B. 2313), and they support Medicaid Expansion under Obamacare. Can you guess which candidates agree with them? A Mar. 19, 2013 article, Northern Virginia lawmakers recap transportation, Medicaid expansion by LoudounTimes.com, makes the point that these positions are not new for Joe May. That probably explains why he lost his seat in the House of Delegates.

The following is from an email from John Whitbeck’s campaign. 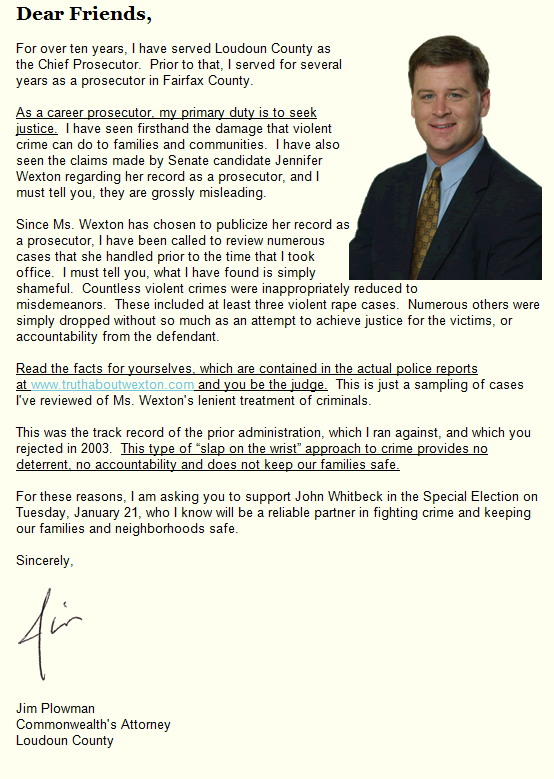