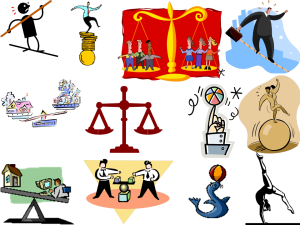 Tony is one of our more persistent and interesting commenters. What does Tony think of our political problems? He thinks we need to restore the “balance”. Does that sound silly? If you are of the Liberal persuasion, and you have read his comments (here and here), I suspect you think Tony’s analysis of our political situation quite logical. Consider why Rick Santorum threatens Liberals, and Mitt Romney really doesn’t.  Rush Limbaugh put it this way.

Well, you know, I can see liberals being far more frightened of Santorum.  I think you have a good point there.  Santorum threatens them in their minds. He really doesn’t at all, of course… Ah, well, he threatens them if they’re big government believers. They think he threatens their personal freedom. If anybody’s doing that, it’s Obama.  But they are scared to death because Santorum is a man of core values, and Romney has this image that he goes back and forth, that he flip-flops.  Whether it’s deserved or not, that’s what people think of him.  Santorum, there’s a core there that’s undeniable, and it scares liberals. It scares ’em to death. Because Dave, most liberals don’t have a core and don’t want one.  Not having a moral core is their definition of freedom. (from here)

Does that sound absurd? Mean to Liberals? Well, consider Tony’s response to criticisms of his political philosophy. He refuses to address moral issues. Instead, he talks about working for the right balance. Yet, without a firm commitment to a sound moral code, mankind is helpless to resist sins such as murder, stealing, rape, and so forth. Even when we remain instinctively kind to the people closest to us, we will try take advantage of strangers. Isn’t that why President Barack Obama has such a long list of enemies? Because Liberals have no moral core, it is easy to pit them against the rich, right-wing Christians, oil companies, Wall Street, polluters, …..

From this idea of man, its proponents draw a host of conclusions essential to any understanding of the contemporary American mind. First, a radical individualism: all social institutions and relations must be understood as nothing more than the purely conventional products of free choice on the part of naturally autonomous individuals. Social relations are conceived as something artificial, external and contractual, rather than being rooted in man’s nature as a social being. Secondly, a thorough-going subjectivism: the liberal individualist theory of man culminates in what Stanley Brubaker terms a “dogmatic doubt that we can ever know what is good for man and woman or that there even is such a thing as the human good.”5 Thirdly, the elevation, in the absence of a substantive theory of the good life, of individual autonomy, individual choice, to the status of the highest good. It issues in what Francis Canavan has described as “a steady choice of individual freedom over any other human or social good that conflicts with it, an unrelenting subordination of all allegedly objective goods to the subjective good of individual choice.”6 Fourthly, that the protection of autonomy of the individual demands the construction of an economic and political order that will be neutral on what Dworkin terms “the question of the good life.”7 Even when its proponents advocate a large, activist interventionist government charged with creating a more egalitarian economic order, they do so in the name of securing for each of the individuals who comprise the society an equal opportunity to live the lifestyle of his or her choice. Finally, on the privatization of religion, the systematic exclusion of religion and religiously-based values from public life. It results, in other words, in the construction of what Neuhaus has termed “the naked public square.”8

What is an alternative definition of freedom, one that actually works? Instead of trying to evade the moral laws God created for us, we can choose to love God and be obedient to Him. That is not a huge sacrifice. Without God’s love and guidance, we have no significance. Our lives are without purpose.

Here is an old post that explains, WHEN DO THE PEOPLE STEAL THEIR OWN FREEDOM?

11 thoughts on “RESTORING THE BALANCE?”